I often need to quickly test a snippet of HTML, mostly to see how it interacts with our accessibility APIs.

Instead of creating some throwaway HTML file each time, I find it easier to paste in the HTML in devtools, or even make a data URI.

Last week I spent an hour creating an extension that allows you to just paste some HTML into the address bar and have it rendered immediately.

You just need to prefix it with the html keyword, and you’re good to go. Like this html <h1>Hello, World!</h1>.

There might be other extensions or ways of doing this, but it was a quick little project.

(Warning: Modifying userChrome.css is not guaranteed to work between versions of Firefox and may lead to hard-to-diagnose bugs. Use at your own risk!)
Firefox Quantum has made a clean break from Firefox’s legacy addons. Hooray!
A casualty of this change is the ability to have addons that fundamentally alter Firefox’s user interface. This can be a problem if you depended on this for accessibility needs. Say, you had an addon that enlarged the fonts in Firefox’s chrome.
Luckily, not all is lost. With some CSS knowledge, you can customize the Firefox user interface as much as you need. Simply drop some CSS rules into $PROFILE/chrome/userChrome.css.
Here is an example rule that employs large yellow on black text:

The effect on Firefox will be dramatic:

Note, this will break things, and it will not be perfect. Before using this kind of solution check what accessibility features your platform provides.

After porting Aaron’s NoCoffee extension to Firefox, I thought it would be neat to make a camera version of that. Something you can carry around with you, and take snapshots of websites, signs, or print material. You can then easily share the issues you see around you.
I’m calling it Phoropter, and you can see it here (best viewed with Chrome or Firefox on Android).
I could imagine this is what Pokémon Go is like if instead of creatures you collected mediocre designs.
Say you are looking at a London Underground map, and you notice the legend is completely color reliant. Looking through Phoropter you will see what the legend would look like to someone with protanopia, red-green color blindness. 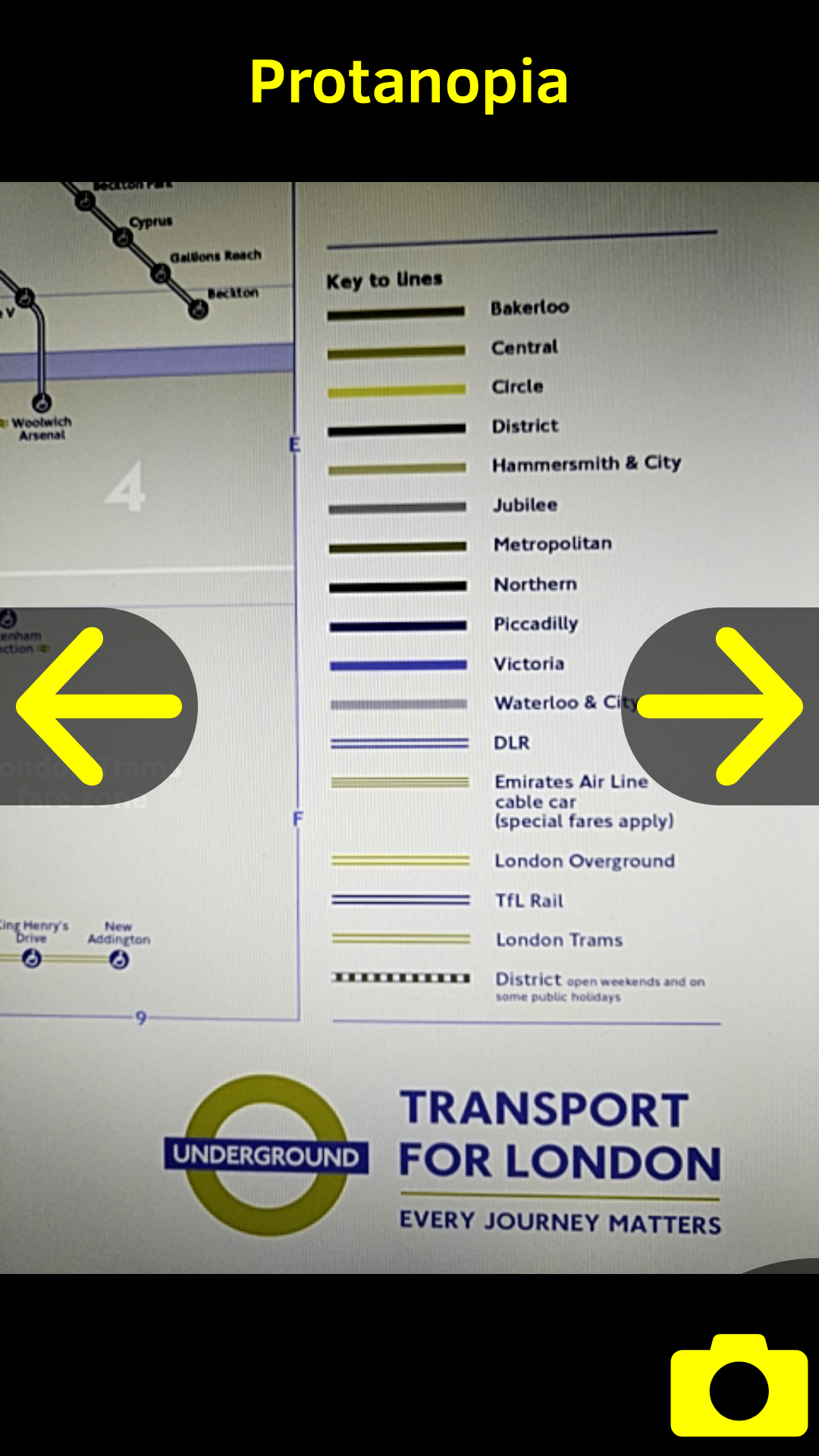 You can then grab a snapshot with the camera icon and get a side-by-side photo that shows the difference in perception. You can now alert the transit authorities, or at least shame them on Twitter. 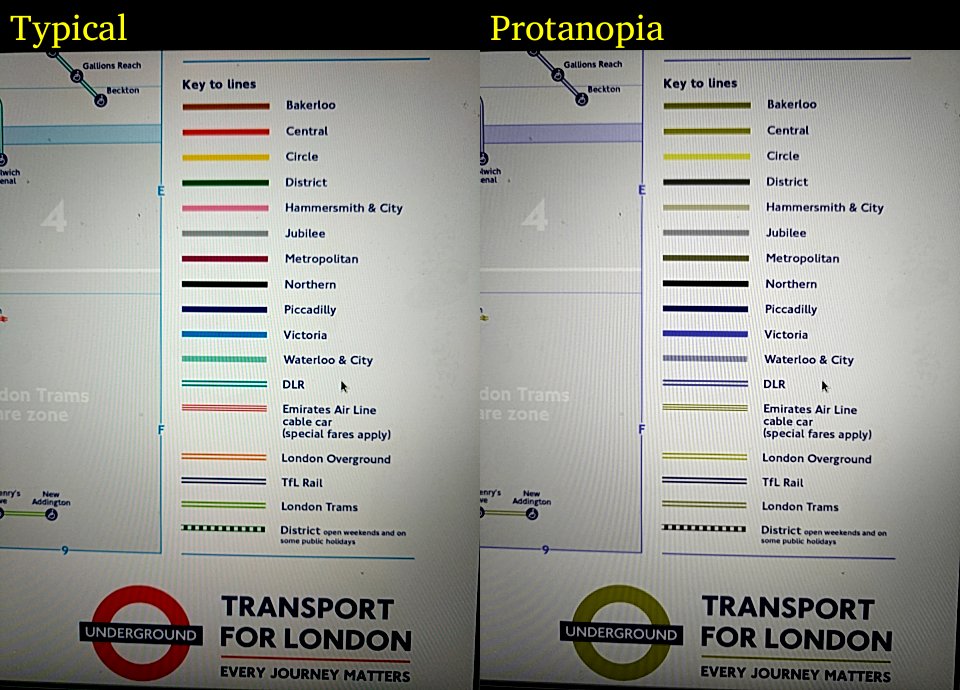 Once you get into it, it’s quite addicting. No design is above scrutiny. 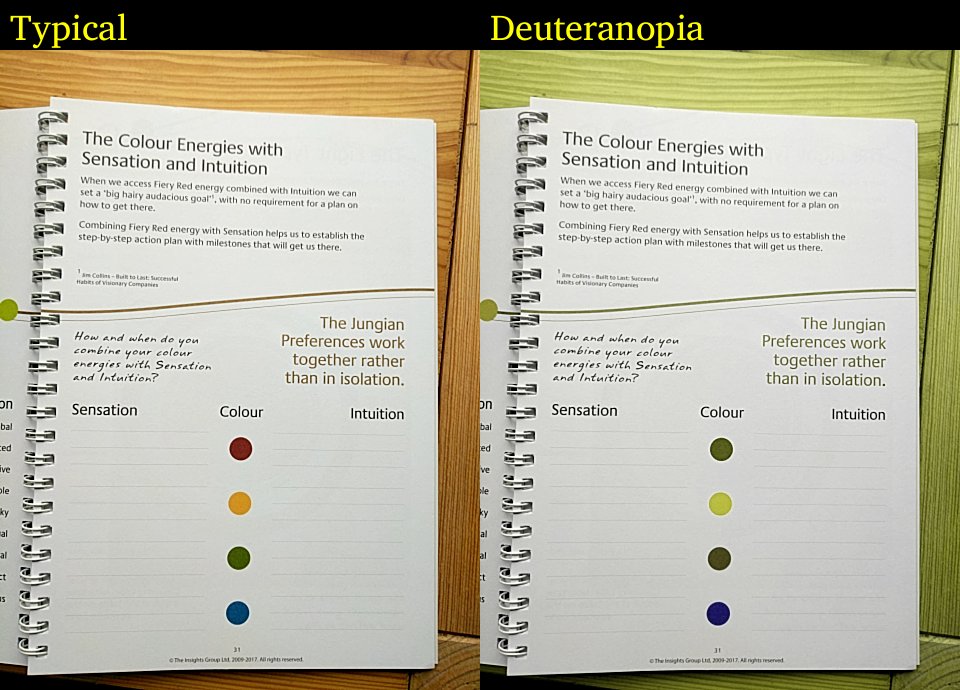 I started this project thinking I can pull it off with CSS filters on a video element, but it turns out that is way to slow. So I ended up using WebGL via glfx.js. Tried to make is as progressive as possible, you can add it to your home screen. I won’t bore you with the details, check out the source when you have a chance.
There are still many more filters I can add later. In the meantime, open this in your mobile browser and,